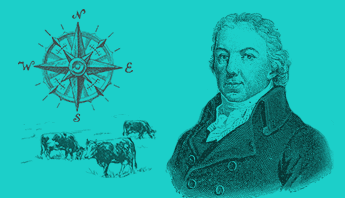 History of the world’s first vaccine

In the early 18th century, the first ever vaccine was discovered by Edward Jenner while attempting to find a cure for smallpox. He is considered the Father of Modern Vaccination due to his success in inventing the world’s first vaccine which eradicated Smallpox (source).

Here is some background on the deadly virus:

History suggests that smallpox can be traced back over 3,000 to the Egyptian Mummies, however, the earliest written description of smallpox is from China in the 4th century (source).

Smallpox was introduced to the New World in the 17th century by European Settlers, but by that time it had already spread all throughout China, Korea, Japan, Africa, Spain, Portugal, The Carribean and South America.

The symptoms of the deadly virus included: high fever, fatigue, a headache, and a backache. After a couple days, a flat, red rash appears—starting on the face and upper arms, and then it spreads all over your body leaving severe scarring and discomfort. On average, 3 out of 10 people who got smallpox died.

Jenner, a family doctor from Gloucestershire, noticed one day that the milkmaids in the countryside near his hometown of Berkeley, had clear skin and were not affected by the scars that smallpox left. Upon investigating, he found out this was because they had previously had cowpox, protecting them from smallpox (source).

It wasn’t until he came upon Sarah Nelmes, a milkmaid who had blisters on her hands after milking a cow, that Jenner had the idea to infect a healthy individual Sarah’s cowpox based on his knowledge of variolation.

Variolation was the first method of trying to control smallpox, named after the virus that caused smallpox: Variola Virus. It consisted of exposing people who had never had smallpox to a mild dose of the virus via material from a sore through their arm or through the nose. This would cause them to develop the symptoms of smallpox (fever and rash), but fewer would die than of those who didn’t experience variolation (source).

On May 14, 1796, Jenner used the pus from Sarah’s cowpox lesions and inoculated it into the arm of James Phipps, the 9-year-old son of Jenner’s gardener, who had never had cowpox or smallpox. Phipps did in fact contract cowpox, but after being exposed to smallpox shortly after, he never contracted the virus (source).

Jenner went on to publish his treatise “On the Origin of the Vaccine Inoculation,” where he made his discoveries widely available without seeking profit for his work. Not only did he want to eradicate smallpox, but also make vaccinations free and available to everyone (source).

Although the vaccine had been discovered, smallpox was still widespread almost two centuries after Jenner hoped it would be eradicated. In 1967, an Intensified Eradication Program began which consisted of the development of the bifurcated needle, the establishment of a case surveillance system, and mass vaccination campaigns (source).


On May 8, 1980, the World Health Assembly declared the world free of smallpox (source).